Will Your Rights Be Determined By Someone Else’s Religion?

“As a respected authority on church-state separation and culture-war issues, Rob Boston demonstrates an understanding of religious liberty that is sadly lacking among the God-fearing preachers and politicians of today’s religious Right. Taking Liberties is both entertaining and enlightening, a valuable resource for those who strive for sanity and reason in public policy.”

“Rob Boston eloquently makes the case for what religious freedom is and what it is not. It is the right for you to promote and try to convince others that what you believe is correct, but it is not the right to have the government do it for you. He backs up his case with many alarming examples of threats to religious liberty in political, cultural, and educational areas, among others. People of all faiths and of none can read and benefit from this thoughtful, well-documented book that shows why ‘live and let live’ on matters of religion can benefit us all.”

—Herb Silverman, founder and president emeritus of the Secular Coalition for America

“A valuable reminder of the importance of religious freedom in America's past and present, and an eviscerating critique of the attempts by the religious Right to use a false language of 'religious liberty' to undermine the very rights they pretend to support.”

“After more than 25 years working at Americans United for Separation of Church and State, Rob Boston knows a thing or two about the Religious Right, their motivations and tactics, and what the future appears to have in store for them. His latest book gets to the heart of the religious freedom we’re guaranteed in the Constitution and how conservatives have tried to eliminate them in a variety of areas."

"...there’s much food for thought here, and reading the book will arm you with the facts, whatever you decide." 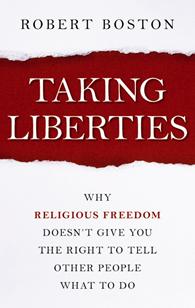 Taking Liberties  is available through online booksellers like  Amazon.com  and major bookstores like  Barnes & Noble  or  Books-A-Million.